A few days after Election Day in the United States, the Spanish took to the polls for their own general elections.

Here is an in-class activity using authentic resources from the participating parties in this past Sunday’s election.

Students will read and discuss campaign messages for the Spanish general election from four different political parties, then cast their ballots for the party of their choice!

About the November 10th Election

On Sunday, November 10th, Spanish citizens took to the polls to cast their ballots for the 14th Cortes Generales of the Kingdom of Spain. This is the second election in less than six months as a result of lack of political majority of either the left or right blocs. The Cortes Generales represents the two legislative chambers of Spain, with the Congress of Deputies (lower house) and the Senate (upper house). Citizens voted to elect the 350 seats of the Congress of Deputies as well as 208 of the 265 seats in the Senate. 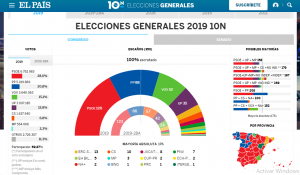 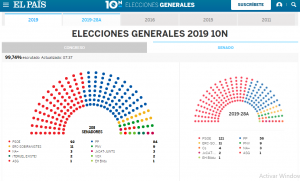 In majority of the autonomous communities of Spain, PSOE (Partido Socialista Obrero Español) was the winner by the slight majority followed by PP (Partido Popular), Vox, Unidas Podemos, and Ciudadanos.

What does these results mean?

Neither the left or the right have the 176 seats of 350 seats needed for absolute majority in Congress. This was the fourth election in just a span of seven years to determine either left or right wing majority. According to El Pais, PSOE and PP had mostly swapped turns holding power, but “the economic crisis spawned protest parties and Spanish politics have now become defined by lack of parliamentary majorities”.  Thus, political uncertainty in Spain will remain unless party coaliations are made and a majority is reached.

Below are sample campaign mailings and messages that Spanish citizens received prior to the election.

In small groups, students will read each mailing/ propaganda and respond to the sample discussion questions below.

After, students can cast their ballots in class to vote for the party they would vote for in the election.

Click on the image below to access the party’s plaform. Have students start on page 8 of the party’s program. 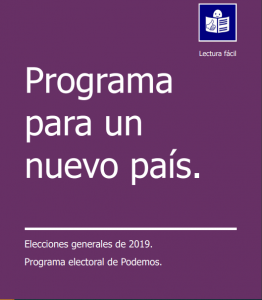 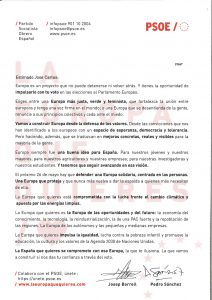 For more information, here are highlights from the November 4th debate.

Submit the form below to connect with a Forum Program Adviser who will create a personalized itinerary for your school trip!